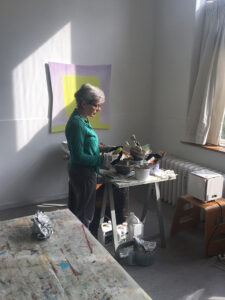 “At first glance it is evident what the work of Marena is about: space. In case I wouldn’t have understood: on the table is a book by Georges Pérec, Species of Spaces. She applied this title to one of her installations in which she created a three-dimensional painting in a kind of glass showcase – as if you could walk into her imagination.

While we talk, my eyes wander through the studio and are caught by some fragments of drawings or paintings casually stacked on top of a low filing cabinet. They are loose, autonomous brushstrokes, one, two or three painted gestures, meticulously cut out of canvas and paper. Like the tools of a carpenter lying around, here’s a supply of spaces that might come in handy. I’ve seen it before, in other studios, but it never fails to fascinate me: these selections and cuttings from larger compositions, conserving the moments in which the work succeeded. They are selected and preserved to be scrutinized one day, when there are no easy answers to the questions the work at hand puts to her. Such fragments also bring to mind the idea that the work of painting is never finished, that there’s trial and error: even when a work is finished it is not, because the essence of painting is to open up space towards the future.

In much the same way Marena Seeling uses the photos she makes of spaces and situations that strike her; and these images are appropriated and transformed. Alienation is never an end in itself; the aim is, as so often in modern painting, to initiate a conversation between reality, memory, image and paint in which each party voices its desires. In doing the work, she discovers what she wants to say. There is no pre-determined meaning, and it’s the work on the image that discovers and reveals meaning.

Marena Seeling expresses the origin of her painting succinctly as a memory of her childhood in the village of Weurt, on the Waal River, facing the city of Nijmegen: this side of the dike establishes another mood, another me, than the other side of the dike. When I stand here and look, I see something different, I perceive differently than when I stand there and observe from there. When I move I leave a space behind, but I also take it with me as a memory, already seeing something else.”